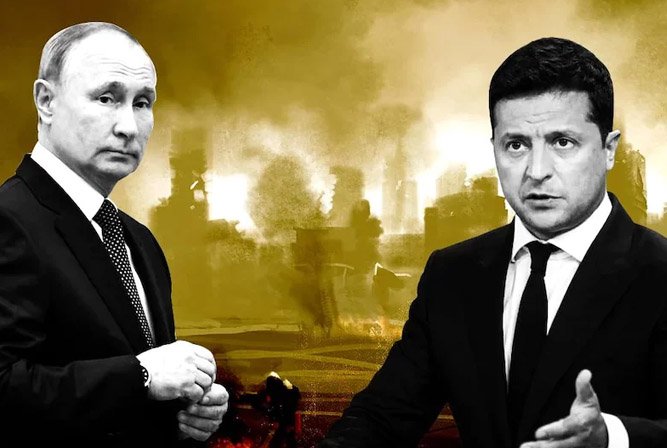 Why Has Russia Invaded Ukraine and What Does Putin Want?

The Russian air force has launched a devastating attack on Ukraine, a 44 million-strong democracy in Europe, bombarding their cities and closing in on the capital, Kiev, triggering a mass exodus of refugees.  What has Putin done that has disrupted Europe’s whole security structure and outraged European leaders? By upending a peace agreement with his neighbor, Russia’s authoritarian leader has unleashed what European leaders have referred to as “Putin’s war.”  “Why Has Russia Invaded Ukraine and What Does Putin Want?”

Why did Russian troops invade?

A pre-dawn TV address by President Putin on 24 February stated that Russia cannot feel “safe, develop, and exist” as a result of what he claimed was a constant threat from modern Ukraine.

At the beginning of the campaign, airports and military headquarters were attacked, and then tanks and troops arrived from Russia, the Crimean peninsula and Belarus, razing neighborhood and razing homes and forcing millions of Ukrainians from their homes.

Yet Russia does not allow the use of terms like war or even invasion, and threatens journalists with jail if they do so. For President Putin, it is a “special military operation.” Many of his arguments for war were unfounded and irrational.

According to him, he was aiming for the “demilitarization and de-Nazification” of Ukraine to protect the people subjected to bullying and genocide. But, in reality, Ukraine enjoys a vibrant democracy, led by a Jewish president.

Ukraine has been accused of being taken over by extremists by President Putin ever since its pro-Russian president, Viktor Yanukovych, was removed in 2014 following months of protests against his rule.

While Ukraine has not turned right, it has turned towards the West, and Russia’s leader is adamant that it will reverse that trend. The protests started after Moscow pushed Ukraine’s president not to sign an association treaty with the EU.

As retaliation, Russia seized southern Crimea in 2014 and triggered a rebellion in the east supported separatists who have been fighting Ukrainian forces for eight years. Around 14,000 people have been killed.

The Ukrainian government has made it clear that it wants to join the European Union and NATO, but the Kremlin does not permit it.

During his deployment of troops, he warned NATO of endangering “our historic future as a country”

What are Putin‘s demands?

According to the Russian leader, in order to stop the war, Ukraine must recognize Crimea as part of Russia as well as the independence of the separatist regions in its east. Additionally, Ukraine must amend its constitution so that it is guaranteed not to join NATO or the EU.

Nevertheless, his demands do not stop there. He wants NATO to get back on track and reverse its eastward expansion, complaining that Russia has “nowhere else to retreat to – do they think we’ll just do nothing?”

In order for NATO to make this happen, member states that joined the alliance from 1997 would have to remove their forces and military infrastructure and their “strike weapons” would have to be positioned away from Russia’s borders. This means Central and Eastern Europe and Baltic states.

Germany’s chancellor Olaf Scholz has said that Putin wants an empire and that he wants to take over Europe according to his worldview. Putin wants a Russian empire, he has said.

According to President Putin, the West committed to not expanding NATO to the east back in 1990, but did it anyway.

During that time, however, the Soviet Union was still in existence, so the promise made to Mikhail Gorbachev then only referred to reunifying Germany under NATO. Mr. Gorbachev later stated that at the time “no discussion of the issue of Nato expansion was being held.”

Is there a diplomatic way out?

It seems very unlikely, even though the two sides have held several rounds of talks. Ukraine has already joined NATO, but Russia still insists Kyiv demilitarize and lay down its arms, and that will not happen.

In addition to the war, any eventual deal would need to provide for the status of eastern Ukraine and Crimea as well as arms control with the West.

Why Has Russia Invaded Ukraine and What Does Putin Want?