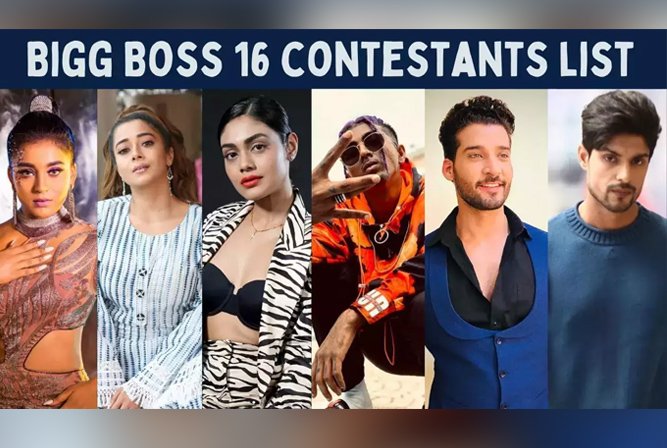 Bigg Boss 16 was launched on 1 October 2022 with a bang. This show was quite popular with fans. The season is looking more interesting than ever before. There will be many popular TV faces in Bigg Boss. In this season’s Bigg Boss, there will be no rules, and Big Boss himself will also play the game.

In this article, you will discover information regarding Bigg Boss 16 Contestants List 2022, since the confirmed contestant’s list for BB16 has been published as the show has begun. It was very exciting to learn which stars were going to be in Bigg Boss this season. Salman Khan announced the names of the Bigg Boss Season 16 contestants who will be featured on Bigg Boss 16.

Once again Salman Khan is hosting Colors TV’s controversial show ‘Bigg Boss 16’ and this time the house of ‘Bigg Boss’ has been designed by Omung Kumar. A new theme has been created for the house, which is circus-themed.

Bigg Boss house rules have also changed this season. It’s not just the contestants who will play this time, but also Big Boss. As a result, the excitement of the people has increased.

Tina Dutta of Uttaran fame comes to Bigg Boss, and this time she will appear on the show. Bigg Boss fans are quite excited to see Tina in the house.

Manya Singh, who came in second place in Miss India 2020, is in the headlines these days. The daughter of an auto driver, Manya comes from a family of auto drivers. Manya was the runner-up in Miss India. Seeing him on Bigg Boss will be interesting.

Nimrat Kaur is one of TV’s most popular bahu. Choti Sarrdaarni gave Nimrat recognition. Watching her contribute to the show will be interesting.

Bigg Boss welcomes a Bhojpuri star. Sondarya Sharma, a Bhojpuri star, is going to be in Bigg Boss’ house this time. Her social media presence is very active.

Ankit Gupta is one of TV’s most popular actors. Colors TV show Udaariyaan recognized him. In the Bigg Boss house, the handsome hunk of TV is about to create a storm.

In Rajasthan, Gauri Nagori is known as Sapna Choudhary. She and Salman’s performance was also shared on Colors TV. It will be interesting to see her in the Bigg Boss house.

Model and actor Gautam Singh Vig has appeared in shows such as Saathiya and Naamkaran. Most people are likely not familiar with Gautam, who will be a new face for them.

Priyanka Chahar Chaudhary was also recognized for her work on Udaariyaan. she played Tejo Sandhu Virk in the show, and she has a large following on social media.

Shrijita Dey of Uttaran fame will also appear on Bigg Boss 16. Sreejita Dey in the Bigg Boss house will be quite interesting for the audience. TV personality Sreejita is well known.

Sumbul Tauqeer Khan’s character has been enjoyed by the audience, so it is now interesting to see her in Bigg Boss.

A popular contestant of Bigg Boss is Abdu Rojik. His singing is well known. The fans were surprised to see Abdu Rojik in the Bigg Boss house.

An Indian actor named Shalin Bhanot. In Zee TV’s Naagin, he played Keshav. He participated in MTV Roadies in 2004.

More Read: How to Make Momos at Home Step by Step